What's on your mind?

with so many rips referencing Friday Night Funkin' and its mods (especially Whitty) being uploaded recently, I think it's likely we might need to make a "Rips featuring Friday Night Funkin'" category soon, similar to ones like "Rips featuring Undertale" (which would actually be a nice parallel to how there were rules for Undertale rips back when in 2016, now that I think about it).

of course, I don't think this category should be created just yet, but at the rate these rips are being created, I think we might need to soon. then again, these recent rips may just be because of the game's current popularity, but I have a feeling these might be here to stay.

what do y'all think?

There's no instance of Shuric Scan/Overdrive (the original song that Shuric Scan is a remix of) on List of songs featured in rips. I've searched for the 4 possible composers (t-PORt, SoFT MaNIAC, Ryuichi Nitta or Mayuko Okamura) in the list yet found nothing about Overdrive/Shuric Scan. I can edit it and put it there, however I only know one rip that uses Shuric Scan currently (the latest Spookeez rip). This might be the only rip that uses Shuric Scan, but still; there are songs that only have one rip in the list.

SiIvaGunnerList of songs featured in rips

Guess i didn't explain what this was for well enough. It's not for unrelated uploads on "did not halt the upload schedule" days, or a copy of the Rips by Event category. It's for individual rips uploaded on notable days, such as Dinner - The Dinner Game being the only upload for thanksgiving, or The Boys Are Back In Town - Guitar Hero Metallica being the only upload for St. Patrick's day.

Changing the name would be a good idea though.

The Boys Are Back In Town - Guitar Hero Metallica

I'm still new to the concept of SiIvaGunner. Was SiIvaGunner originally one guy? 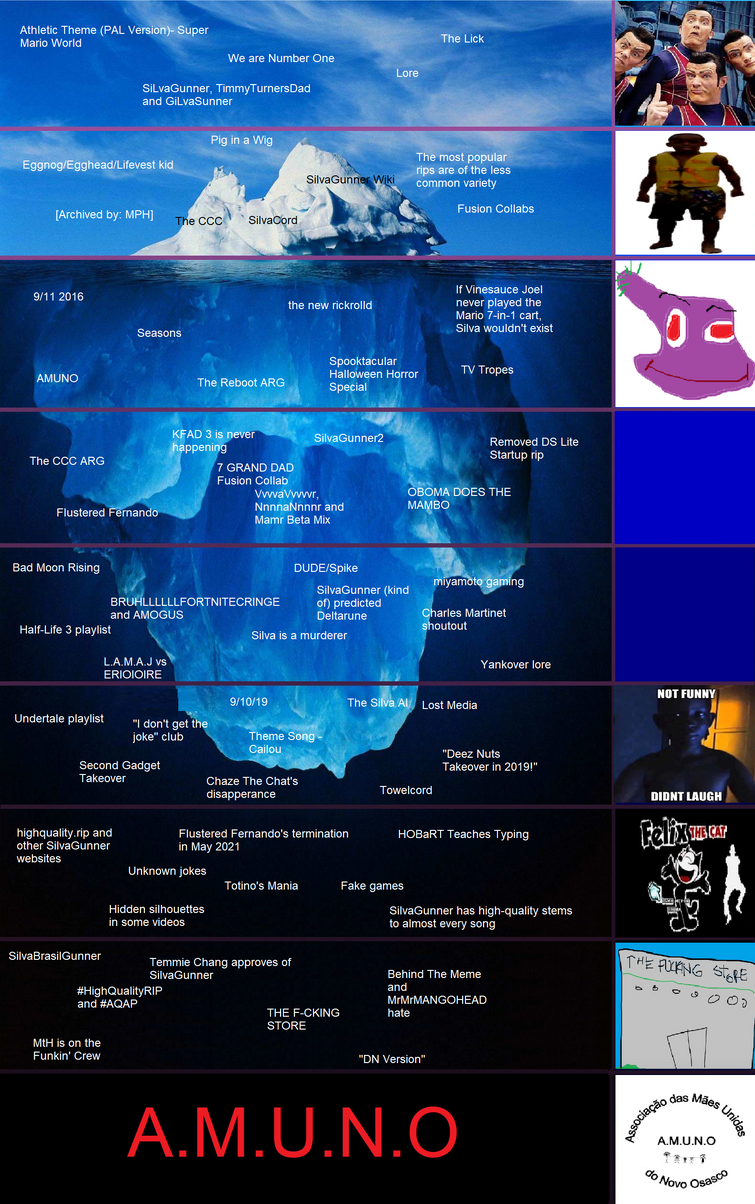 Please double-click the image, right click the preview then click "Open Image in New Tab" to see it in high quality™

The Lick: A melody that appears in Jazz music sometimes. It is used as a joke in some rips.

[Archived by: MPH]: It means "Archived by Max Profitt Haltmann. Appears in most Season 1/2 rips, indicating that they are in the Haltmann's Archives playlist

The most popular rips are of the less common variety: Just see for yourself. They aren't simple mashups or melodyswaps, they are medley rips, YTPMVs, sentence-mixing, etc.

AMUNO: A french youtuber and contributor to SiIvaGunner. He used to reupload his EPIC PIXEL BATTLES and shitposts.

Removed DS Lite startup rip: The first Deez Nuts rip. It was the Nintendo DS startup, except it was the "Nintendo DN". It played the startup and then the a clip from the vine (compressed). For some reason, it was removed by January 2021.

OBOMA DOES THE MAMBO: A livestream which played a whole episode of the Nutshack, and then you get beaned in the end.

SiIvaGunner predicted Deltarune: Undertale 2 rips were released 2 years before Deltarune released. While Deltarune is not a direct sequel to Undertale, it is a spritual successor.

miyamoto gaming and black miyamoto gaming: Weird unlisted videos relisted during the Yankover, which featured several pictures of Shigeru Miyamoto (and photoshopped images to make him black), one of them saying "FUK U! I DONT LIKE SILVER GUNNER!" (or something similar). For a short period of time, SiIvaGunner was also named "miyamoto gaming". And for some reason, the articles for these videos were deleted from the wiki.

Bad Moon Rising: A 1 hour long CCC episode. However, it was a racist one. Read more about it on the wiki, because it's way too much info.

Chaze The Chat's disappearance: In August 2019, Chaze The Chat vanished from the internet. His last tweet was "Composer: BotanicSage".

"Deez Nuts will be taking over the channel in 2019!": A leak from the Grinch takeover. However, this never happened (unlike every other thing he leaked during the takeover)

A.M.U.N.O: I just searched "amuno" and found this. Is it something SiIvaGunner/AMUNO related? No. It's the "Novo Osasco United Mothers Association". I think Novo Osasco is a city in Brazil. Also, it's the only joke entry here.

(edited by Supaniboi)
King for Another Day TournamentSiIvaGunnerWe Are Number One

There are so many rips featuring Renai Circulation, should we make a page about it or something? 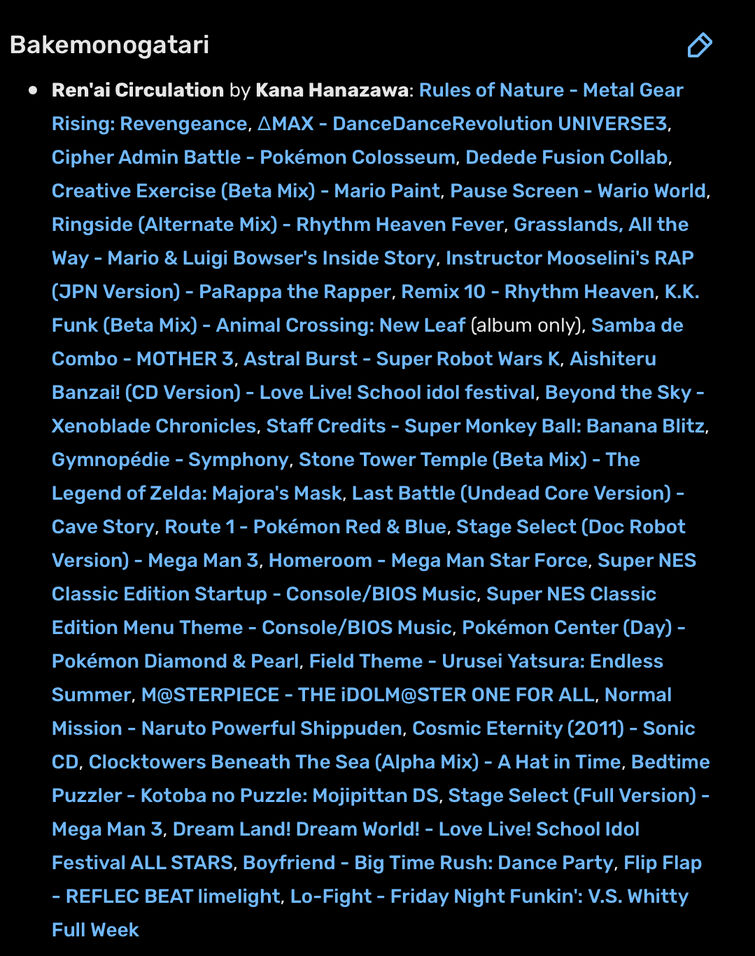 !! If you disagree, then please feel free to discuss it with me here. Just don't delete this. !!

Mods y u do this? Is it due to the hate speech present in the original posts? While they are very transphobic and rude, Supaniboi brought it up so we can discuss and possibly refute these points of contention within the SiIvaGunner community. If we remove it without explanation, then we kinda are proving one of their points that "Siivagunner became a safe space where only people who agree with them get to be in on the channel." Before you suggest that I support them or am one of them, I think their attitudes are toxic and ruin chances at reasonable discussion. But if we shut things down with little explanation, we lose the chances to discuss some of the less inflammatory portions of their post, like "Supposedly the no-politics rule only counted for people who had the wrong opinion about something. This would become apparent throughout the years more and more. Allowing only people who agree with him to talk about politics." To be frank, I think the far-right also has a huge problem with shutting down debate, which you can clearly see in the post. But if we want to be better than the edgelords, we need to discuss and refute these points, even if it likely is fruitless. I just dislike the censorship present in this wiki, like not allowing Blaze's article to reference his alleged pedophilic behaviors.

!! If you disagree, then please feel free to discuss it with me here. Just don't delete this. !!

So I just started making a SiIvaGunner Iceberg. I know a lot about SiIvaGunner, but not everything. Does anyone have a really obscure piece of trivia about SiIva/TTGD?

Here how it looks so far: 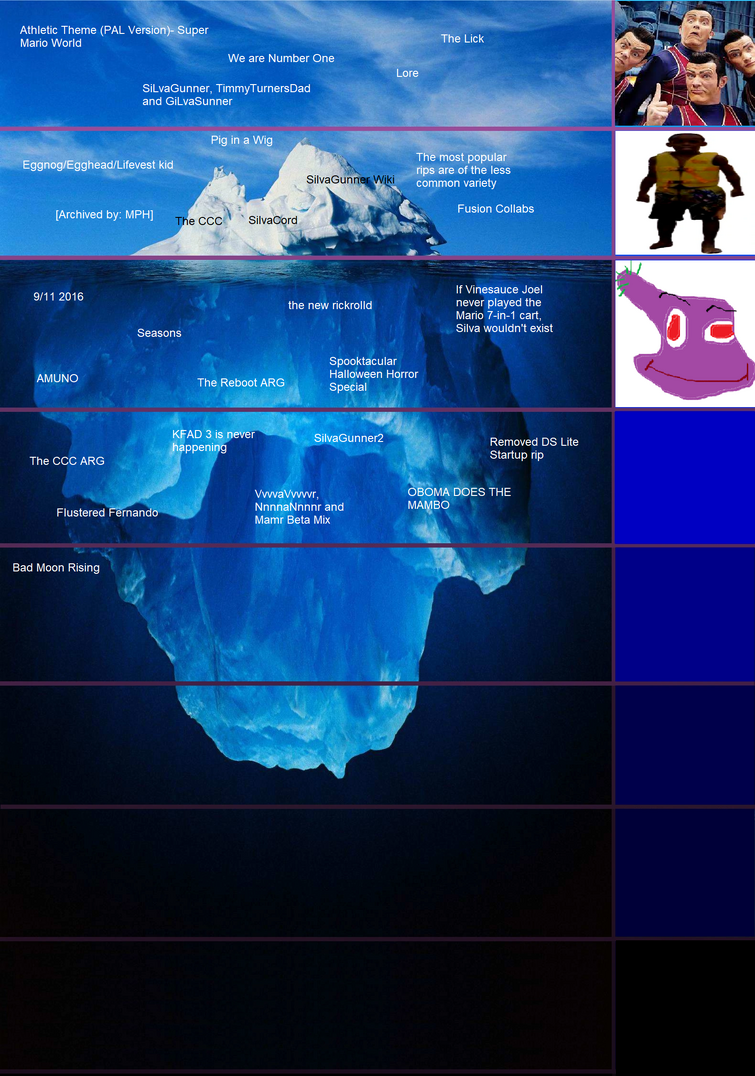 How would you go about getting a team of people together for a fan-made KFAD? Just curious

To me, it makes sense from Youtube's standpoint (only purpose was to make potentially offensive videos, literally had a photo of a guy who murdered 6 people as its pfp). Still, it feels like part of SiIva's history is gone.

Upon internal discussion, the wiki staff have decided to increase the minimum number of rips for a track to qualify as frequently ripped from 8 to 10. This may change in the future, and rules for what qualify as rips of the same track may also change. For now, we've decided to slightly increase the number to see how much that changes things.

Thank you all for continuing to contribute to the SiIvaGunner Wiki!

I've noticed a trend with some rips where, instead of an edit to the advertised track, a meme video has stuff edited out. Maybe we could have a page or category for listing these?

Also, shout-out to YouTube commenter "literallyn01imp0rtant", who left a comment on the Nintendogs vid that lists a bunch of examples.

Recently, I've been making pages for many GiIvaSunner rips and I wanted to make a page for the switcheroo rip "It's Showtime! (Beta Mix) - Undertale", but I can't identify the song that plays here, so I'm here asking for help. Does anyone recognize this?

I tried asking this on r/GiIvaSunner as well. 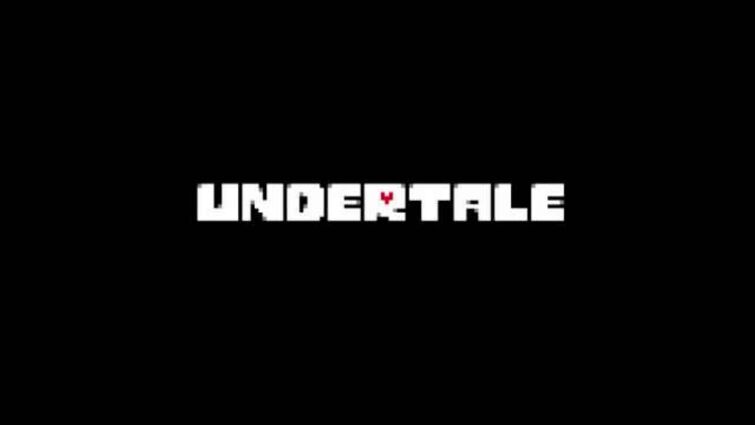 Sources: Among Us Trap Remix, Lyin' 2 Me, Among Us in Real Life, Airpod Shotty.

Would be canon to the lore 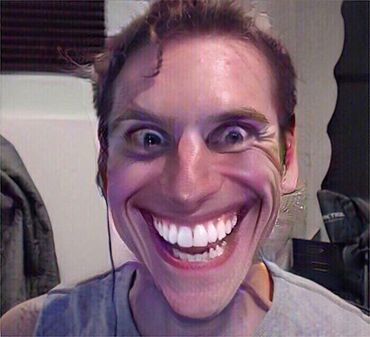 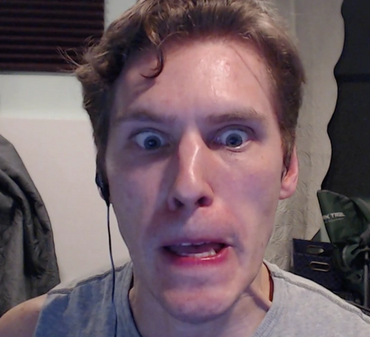 Can I link game titles and other stuff to their wikis like what I did right here? https://siivagunner.fandom.com/wiki/Big_Rock_Finish_B_-_Rhythm_Heaven?action=history