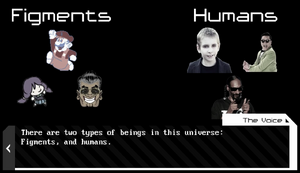 Characters who appear notably in SiIvaGunner's uploads and lore.

More often than not, characters used in a SiIvaGunner videos represent channel memes. As explained in "Old Times", figments are a type of being in the SiIvaGunner universe who represent a human's idea; they all resided in the figment realm prior to "Prologue". This implicitly applies to all fictional characters who appear in the CCC, as its setting is supposed to be the "real world". As such, figments are the most common type of character seen on the SiIvaGunner channel. Examples of memes personified by figment characters include:

This sometimes happens the other way around though, as references to or appearances of a character define certain memes. Examples of this include:

However, there is some ambiguity as certain fictional characters who appear in the CCC, for example Waluigi or Meta Knight, are not associated with any channel meme, and the majority of memes are not represented by any CCC characters (as a consequence of the CCC taking place during December 2016 and thus almost exclusively representing Season 1 memes in its character roster).

"Old Times" also delineates humans as a seperate type of character from figments. Humans appear in the CCC for the same reason figments do, to represent a channel meme. In the case of Snoop Dogg, Angry Joe, and JustinRPG, these memes simply encompass references to the person or their body of work. However, some humans who appear in the CCC, like Chip tha Ripper, Soulja Boy, Misha, or Charles Barkley, seem to only represent a single source, as the rest of their works have not seen widespread use in the channel's rips.

SiIvaGunner, Loud Nigra, Chad Warden, and The Voice Inside Your Head are exceptions to the rule, being fictional characters who are not considered figments; the plot of SiIvaGunner: Rebooted, which takes place in the "real world" prior to the CCC, pertains to these four characters.

Main article: Category:Characters from King for a Day tournaments

Though never explicitly stated, it is apparent that the concept of figments does not apply to Wood Man's second universe seen most prominently in King for a Day-related lore; fictional characters and nonfictional humans are seen coexisting with no real setup or justification, implying that its universe works differently. The major characters who appear in King for a Day are unique in that rather than appearing to personify a particular idea, the ideas are built around the character to create their sourcelist.