Mario "Mario" Martinez, commonly known as Gangsta Mario[2], is a personification of the meme "Crank Dat Super Mario" and a minor character on the SiIvaGunner channel.

The concept of a "gangsta" version of the Nintendo mascot Mario originated from a 2004 commercial for Mario Pinball Land, which depicted Mario dressed in "gangsta" attire, with a baseball cap, a jumper and a gold chain with a mushroom on it, performing a short beatbox. This is the main form taken by Gangsta Mario in his appearances on the channel. Another origin of the concept is a 2007 DeviantArt post by DDBUG007 titled "gangster mario", which depicts an intimidating version of the character edited from his render from the box art of Super Mario Sunshine. This version of Gangsta Mario is distinguished from the ordinary Mario by his red eyes and dual pistols.

Gangsta Mario debuted on the SiIvaGunner channel on MAR10 Day, an event dedicated to his character with a notable source used being Mario-themed rap songs, particularly "Crank Dat Super Mario" by Crank Squad. The character made several appearances through the event, and it culminated in his death, a mourning ceremony in his honor and an album release presented as his last will and testament.

Gangsta Mario would later appear as a ghost during the "JET SET RADIO - 24/7 FUNKY FRESH BEATS FROM TOKYO-TO" stream, as well as the rip "Character Selection (Version 1.1) - Gangster Bros." uploaded for the April Fools' Day 2021 event. He has also made physical appearances on the art for the albums STUDIO TRIGGER QUALITY MUSIC WORKS and SiIvaGunner's Lonely Rips Club Band.

Gangsta Mario as he appears in "LOL Song (Caramelldansen) - ROBLOX". 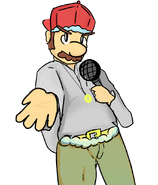 Gansta Mario as he appears in "Ending/Hail in the Hustle ~ Claim the Reign - Gangster Bros.". 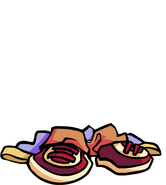