148
"Giant Steps" is a jazz composition, composed by jazz musician John Coltrane. It is also a minor meme on the SiIvaGunner channel.

The song "Giant Steps" was first composed by John Coltrane and is the first song on his album Giant Steps. It is a composition that contains a rapid progression of chord changes through 3 keys (commonly known as "Coltrane changes") shifted by major thirds, creating an augmented triad. Various musicians have used these Coltrane changes in their song. This progression still stimulates the harmonic thinking of contemporary jazz.[1]

The song was featured in the game Grand Theft Auto IV, for the fictional radio station Jazz Nation Radio 108.5.

On SiIvaGunner, "Giant Steps" first appeared during the latter half of Season 2 in the "Drowning - Sonic the Hedgehog" rip. One month later, a channel event dedicated to the joke, John Coltrane's Birthday, cemented it as a SiIvaGunner meme. 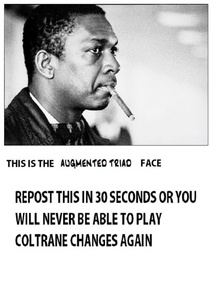 The first rip, as well as the event's rips and a few rips afterward, reference a repost-bait image that refers to the Coltrane changes.