"Fun Park Massive - No One Can Stop Mr. Domino!" (September 2, 2016)
Green de la Bean, also known as the Bean, Beaned, or Vegetal, refers to a bait-and-switch-like image of a cartoon green bean with text declaring that the reader has been "beaned". Originating on Facebook posts, this meme has since moved on to the SiIvaGunner channel.

Most of Green de la Bean's first few appearances were jumpscares; the music suddenly switches to a very loud, bass-boosted song, usually either "U Guessed It" by OG Maco or "No Words" by Hopsin, as the Green de la Bean image is frenetically animated onscreen. This meme first appeared in the "Fun Park Massive - No One Can Stop Mr. Domino!" rip. The first rip to feature the Bean without it being a jumpscare was "Theme of Blanka - Super Street Fighter IV".

Most of the community reacted negatively to the meme. On September 9, 2016, the rip "Ground Theme (Super Mario Bros.) - Super Smash Bros. Brawl" was flagged and taken down by YouTube. Reacting to this, SiIvaGunner removed every rip with a Green de la Bean jumpscare.  On the following day, the channel held a Bean Mourning Day, dedicated to remembering the Bean's death.

Rips that indirectly reference the Green de la Bean meme appeared after the rips were removed, usually by incorporating "U Guessed It" into the rip. The Bean himself has since reappeared multiple times, with the meme being referenced in The SilvaGunner Christmas Comeback Crisis by the Stringbots. Notably, the video "YOU can join the fight! - A Recruitment Video from The Voice" stated that rip submissions featuring the Bean were banned due to the character's death; this rule was removed in "The Haltmann Works Co. Training Video (Emailing Rips, Art, and King for Another Day Contestants!)".

Screenshot of the channel banner on Bean Mourning Day. 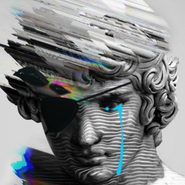