HOBaRT, full name Hyper Operative Baking and Ripping Technology, is a competitor in the King for Another Day Tournament. The character is an ordinary Hobart mixer with the Australian flag on the top, and was selected by the SiIvaGunner Backroom.

"Looking for the perfect contestant to stir things up a little bit? No problem! Our state of the art Hyper Operative Baking and Ripping Technology, or “HOBaRT” for short, comes straight from Australia with the power and durability to mix both the toughest doughs and the highest quality rips. Built to withstand any challenge that comes its way — HOBaRT is unstoppable."
―HOBaRT's description on the MOJO!!

In Round 1, HOBaRT faced Nintendo Power and lost. In the Loser's Bracket, he faced MissingNo. and was eliminated.

Lines in bold were used in the tournaments.

Pow Cards of HOBaRT, Rhythm Masters, and Nico Nico. Also features a strange variant of HOBaRT, referred to as the "SPECIAL DARRELL EDITION". Image is from "Bravo, Johnny!"

VS. screen against Nintendo Power.

VS. screen against MissingNo.. 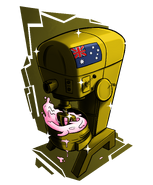 Extremely disturbing art of Paruko being mutilated by HOBaRT. Art by Coach. 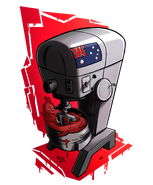 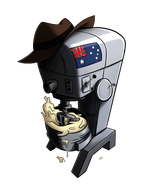 HOBaRT as Agent H, as seen in Ending - Phineas and Ferb: Day of Doofenshmirtz.
Add a photo to this gallery

Retrieved from "https://siivagunner.fandom.com/wiki/HOBaRT?oldid=196076"
Community content is available under CC-BY-SA unless otherwise noted.