150
"Haunted House", also known as "Castle Boss" or "Cache Boss", is an 8-bit song composed by 8-Bit Beast. It is a meme on the SiIvaGunner channel.

On June 13, 2013, ChipMusic.org user 8-Bit Beast published a track created in Famitracker named "Castle boss" in a post titled "Haunted House".[1] The song is notable for its inconsistent/non-existent melody, bare instrumentation, and disorganized sound. Prior to its use on SiIvaGunner, it was a small in-joke with some members of the chiptune community. Notable appearances of the song pre-SiIvaGunner include the album 8-Bit-Beast's Haunted House Remastered, released on October 30, 2015,[2] and the song "Ｃａｃｈｅ Ｂｏｓｓ" by 8-Bit Shifter, a hidden track in the album Chiptunes = WIN: Volume 5, released on July 18, 2016.[3]

"Haunted House" is used most prominently in melody change rips. It first appeared in the September 16, 2016 rip "Vampire Killer - Castlevania". After that, it appeared 19 times during the remaining two weeks of Season 1, almost all of which had a relevant word like "Castle", "Haunt", or "Beast" in the title. It was later used as a major meme during The SilvaGunner Spooktacular Halloween Horror Special. During this event, a fake game dedicated to the meme, 8-Bit Beast's Haunted House, was introduced, which is used to publish edits of/involving the song. Since then, "Haunted House" has become a recurring joke in all Halloween events, along with "Kyun! Vampire Girl".

Since its appearance on SiIvaGunner was the first time the fanbase had heard it, it was initially referred to as "the mystery meme".[4] Eventually, an upload of "Ｃａｃｈｅ Ｂｏｓｓ" by YouTube user MattHubris was discovered.[3] With the increased attention the video received, MattHubris uploaded the original 8-Bit Beast track in another video, "8-Bit Beast - Castle boss", a few days later, making the true source of the meme more widely known. 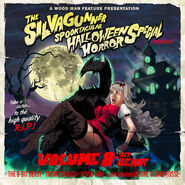 8-Bit Beast as it appears in the cover of The SilvaGunner Spooktacular Halloween Horror Special: Volume 8-Bit Beast.

8-Bit Beast as it appears in the thumbnail of "8-Bit Beast's Haunted House Fusion Collab".