Jazz Cats: The Beginning - SiIvaGunner: King for Another Day Tournament

"Jazz Cats: The Beginning - SiIvaGunner: King for Another Day Tournament"

This is a reveal trailer for the competitor The Jazz Cats. The trailer's story is continued in Jazz Cats: The Ballads of Naxx and Doge.

[Like all of the reveal trailers, it begins with the "What's This!?" jingle and animation. This leads into an original animation. The story begins with a mother cat dropping her son off at college.]

[The son arrives in his dorm room.]

Son: Wow, I'm finally here. I'll show everyone in my grade how much they suck at jazz! I practiced so hard in high school, I'm ready to blow them away with how many Charlie Parker licks I directly lifted from the Omnibook.

[A douchey-looking shiba inu bursts in.]

Shiba: Hey! You must be my roommate. Nice to meet you, I'm Doge Mayer.

[Doge gets his own name/character art screen.] 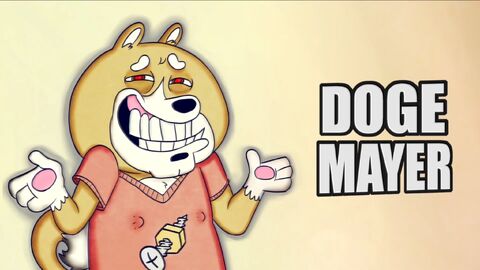 Doge: I can't wait to go to this school until I graduate and not drop out for any reason.
Son: The name's Shade's DuPris, and I play jazz saxophone. I'm 18 years old and better than you.
Doge: Alright, dude, take it easy.
Shades: I can't take it easy. I need to be ready for the freshman jazz jam session at the David Funnie Recital Hall later tonight.
Doge: Nice. I'm going to the singer-songwriter one in the Steve Henk room. Catch you later!

[The screen suddenly switches to an animated 3D model of Simon Fransman.]

Simon Fransman: Hello. I'm Simon Fransman, creator of such immortal yes meme classics such as Mr. Funny Bom Bom Man and Katy Perry sings a very difficult song. [Screenshots of said videos appear.] I was called here today to explain that the word [voice switches to a text-to-speech voice] Doge Mayer [voice switches back] said was in fact a very vulgar word, and "Henk" was used to censor this mutt. The word [bleep] is a very terrible word. And you know why? Because [bleep] actually means "ass" in Swedish! It is a word that even the King doesn't even use. So I don't wanna hear any of you scoundrels use it. Thank you for your time, and now back to your regular scheduled programming.

[We return to the animation. We see the college's cafeteria, where Shades is standing in line.]

Student 1: Hey man, you wanna SLAM! sometime?
Student 2: EUGENE? EUGEEEENE?? GOD I'm gonna kill him.
Student 3: I voted for Bernie Sanders.
Student 4: Man, I can't wait to eat the Asian fusion cuisine this year.
Student 5: FUCK
Student 6: Hey, can you sub for my ensemble?
Student 7: Yo, have you checked out the new Collier?

Shades: Give me your nuggets!
[This command gets its own lovingly-rendered illustration.]

[Shades gets shoved out of the way by a striped cat in a tie.]

Shades: Hey, what the heck hell, man? I was next in line!
Striped cat: Take your fucking lanyard off, freshman. You probably can't even play dirty chords like Snarky Puppy or Robert Glasper. Fucking high schooler bitch.

[The striped cat sits down to eat with his friends, as well as Naxx Guyfieri, previously seen in "SiIvaGunner: King for Another Day Tournament Direct 9.21.2019 (Beta Mix)".]

Striped cat: The fucking freshmen this year, man. They fucking suck. This one asshole was wearing a lanyard and a turtleneck in August!
Hoodie pup: Yeah, man, what the fuck? What do you think, Naxx?
Naxx: The freshman girls aren't even that hot.
[Everyone else at the table is taken aback.]
Hoodie pup: Anyways, are yinz looking forward to the freshman jam tonight?
Bird: Hell yeah, man. It's gonna be funnie as fuck.
Striped cat: I might play a tune or two. Just to show them how much they suck.
Naxx: Hahaha, yeah! And then we can get some freshman girls.
[Again, everyone else is taken aback.]
Hoodie pup: We can hit em with Blue Bossa or something, I know those dumbass freshmen will eat that shit up.
Striped cat: I might whip out the bass for a song, play Dean Town or something.
Bird: Yeah, some Vulfpeck would be scarlet hot. And definitely jazz, Vulfpeck is jazz.
The other three, in unison: Yeah, Vulfpeck is jazz.
Striped cat: Anyways, here's Autumn Leaves.

[Cut to a dumpster. Snoring and a mysterious yellow glow emanates from within... Fade to black.]

[Cut to the David Funnie Recital Hall, where a show is already in progress.]

Announcer: And that was Gay Bee Nutman and the Nut Shaqs with his forty minute rendition of The Flintstones Theme. Which is a jazz standard and in no way at all a meme. Next up, we have, uh... Shades DuPris! [mispronounced phonetically]

[Back to the recital hall. Shades is onstage and about to perform.]

Shades: Anyone for Countdown?
[The audience gasps and yells in shock.]
Audience member 1: Why would you call that? That shit's too hard! No one can vibe with that.
Audience member 2: Yeah! No one can hit those changes.
Striped cat: [from the audience] I can!
[The striped cat arrives onstage.]
Striped cat: You're that freshman from the nug line. Glad you took off your lanyard. The name's Tom Malone, but everyone calls me Milk Bowl.

[Milk Bowl gets his own name/character art screen.] 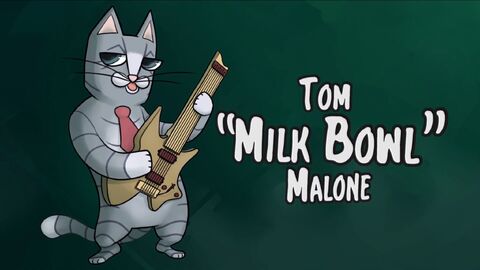 Shades: The name is Shades DuPris. I like bebop music because it's the best kind of music.

[Shades gets his own name/character art screen, with the caption "THIS IS THE SHADES DUPRIS FACE".] 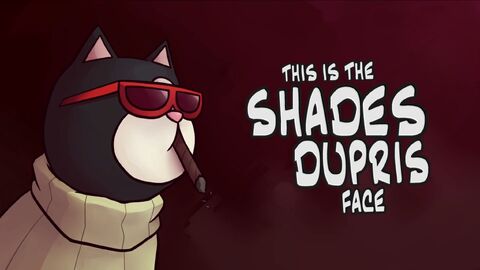 [A grim-faced cat with the same yellow glow that emanated from the dumpster materializes by the piano.]

[donk gets his own name/character art screen.] 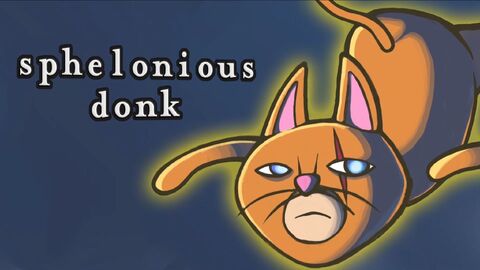 Shades: Can you even play, old man?
Milk Bowl: Yeah, can you even keep up with us?

[With a single swipe of his paw, donk plays a mesmerizing improvisation on the piano, as Shades and Milk Bowl stare in awe.]

[As "Countdown" kicks in, we get a reveal of The Jazz Cats' name and artwork, followed by the King for Another Day reveal trailer outro.]

This trailer is set to seven original jazz arrangements, all of which are included in SiIva Direct Presents.