List of minor characters from the SilvaGunner Christmas Comeback Crisis

The following is a list of characters with small or minor parts in The SilvaGunner Christmas Comeback Crisis.

2B is the protagonist of the game NieR: Automata. Her first appearance in the Christmas Comeback Crisis was in "Timbre of a Kazoo" where she appeared from a portal at the entrance of the Rapper's Union hideout. She revealed that she was searching for Wario and Waluigi, referencing the video "Opening Scene - Waluigi's Tacostand". After Snoop Dogg says he doesn’t know, 2B teleports away. She was later mentioned again by Wood Man, in the bonus episode "Wood Man and Robbie Rotten", where he mentions that she is aware of the time loop going on in the SiIvaGunner world.

In "The Life and Times of Wade L.D.", it’s revealed 2B stole a garlic taco from the Haltmann Works Company, making Haltmann place a bounty on her head for $1,667,820,000. Later on she anonymously calls Wade L.D., telling him that the world is locked in a state of limbo, and she can help him escape.

Later on the two agree to meet at a bar. 2B reveals there that she has traveled to Grandiose City after roaming from place to place. She calls herself a fugitive who wanted to learn about the city and discovered more than she bargained for. She eventually tells Wade that she has the garlic taco that Haltmann was looking for, and agrees to tell him more if he meets her at Warehouse F36.

After they meet back up, she informs Wade that Wood Man told her that Haltmann perpetually locked Grandiose City in the year 2016 so that he can make money indefinitely. She also tells him that she's been pursued by the Haltmann Works Company through several dimensions so that they could steal her dimension-hopping technology. She believes that the garlic taco is her only way out, and contacted Wade so that he could help create the diversion necessary for the two to escape together.

Police close in on the duo, and Wade’s former friends Chase and Jeff also appear on the scene and demand coke from him. 2B has Wade take a bite from the taco to create a portal to the Red Dead Dimension. They jump through the portal with the policemen, Chase, and Jeff hot on their trail.

With there only being one bite left of the taco, Wade decides that 2B should enter the next portal alone. After a moment of deliberation, where Wade admits that 2B is all he has left, she agrees to leave him behind so that he can fend off the police long enough for the portal to close.

2B is able to hop from different dimensions. This is showcased by her appearing in lore videos and also appearing in "shitpost" rips, such as "Final Destination - Super Smash Bros. UItimate". She also appears in The SiIvaGunner Spooktacular Halloween Horror Special Part III: Episode 1, though it’s significance to the lore is currently unclear.

2B with the garlic taco.

2B and Wade caught by the police.

2B and Wade's daring escape.

2B and Wade have to part.

The Cinderella Girls are a virtual J-Pop group from the multimedia franchise THE iDOLM@STER. They were captured during the Voice Inside Your Head's coup and publicly executed for being "weaboo anime bullshit" in "Seasonal Return". Kirari Moroboshi[1] and the Producer[2] were briefly able to talk before their ultimate demise.

The Cinderella Girls before.

The Cinderella Girls after.

The citizens of Grandiose City (a representation of the people subscribed to the SiIvaGunner channel) are mentioned multiple times over the course of the SCCC. At first confused during the Voice's initial coup in "Seasonal Return", they started to riot in "Old Times" but were quickly stopped by the Stringbots.

Some citizens are however glad of the grand anime purge initialized by the Voice. One in particular, a fan of the Nutshack in "No Place To Hide", is a loyal partisan of the Voice and stood in the Rapper's Union's way, summoning a Spheric after them. When the mecha was defeated by Nozomi's Smolitzer, he took to his heels.

Riots started by the citizens.

Dr. Wily is the main antagonist of the Mega Man series. His only appearance so far has been in the side story episode, "Wood Man and Robbie Rotten". At the end of the episode when Wood Man’s bag sets the whole garage on fire, Dr. Wily screams for help. Wood Man responds by saying it’s “just heat man's lights or some shit“, as he walks away with Robbie Rotten. Dr. Wily himself is never seen in person, with only his voice being heard. 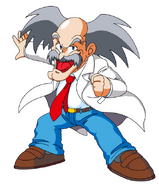 The Elves are Santa Claus' loyal helpers. When the Voice attacked Santa's Workshop with his mechas in "Advent of Hell", they stood the line the best they could but were outnumbered and lost the battle. When Santa, Nozomi and Meta Knight escaped the Workshop, they found a pile of dead elves body. "It was too soon for you guys" sadly said Santa.

In the sixth episode of The SilvaGunner Christmas Comeback Crisis, "Advent of Hell", Santa tells the story of a child he once knew. "He seemed like the jolliest gentleman around," Santa explains, "with his 80's music and his car-interior monologues". One day, this child went on a rampage and caused bloodshed, according to Santa. Santa also kept a photo of this boy with his backup supply of Christmas Spirit.

While not referenced by name, this boy is most likely Elliot Rodger, sole perpetrator of the 2014 Isla Vista killings. Elliot Rodger had previously been referenced a few times on the SiIvaGunner and Flustered Fernando channels.

The INTERCOM is a robotic voice announcing the imminent self-destruction of Santa Claus' Workshop in "Advent of Hell".

The Joke-Explainer™ 7000 (codename JK-EX-7000) is a smol mecha appearing in "Loves the Ladies" to do a recap of the previous 6 episodes, apologizing for the delay between this episode and the previous one and advising some material to better understand the lore. It has the appearance of Smol Nozomi and sports a yellow orb on its head with Wood Man's face on it.

It references an alternate account of SmokyThrill77 which posed as a YouTube commenter to tell the jokes on some rips.[3]

Susanna Patrya Haltmann (best known as Susie)[4] is a character from Kirby Planet Robobot and the daughter and assistant of President Haltmann. Although she has yet to appear in the SCCC, she has been mentioned multiple times (the first time in "No Place To Hide", and only by name since "Loves the Ladies") as she seems to be in some unknown trouble forcing Haltmann to work for the Voice who claims to be able to help her. The Voice was however unable to fulfill his promise and tried to fool Haltmann by masquerading Haruka Amami as her performing the song "The Noble Haltmann", which didn't work at all.

The troops are the Voice's soldiers, sporting a purple uniform. They were first seen in "Haltmann" when a gatekeeper was bested by Robbie Rotten disguised as one of them. They were later seen surveilling Santa's Workshop in "Advent of Hell", two of them accidentally giving Nozomi and Meta Knight the code of a lock.

A gatekeeper and Robbie Rotten in disguise.