Quote is the main protagonist of Cave Story and a competitor in the King for Another Day Tournament. He was revealed to be the winner of the MAGFest 2019 character ballot, and is the first newcomer to be revealed publicly overall.

"Huzzah! Quote is here, and he’s ready for this new adventure to begin! He may be silent, but his trusty Polar Star sure isn’t. Armed with that and music from classic indie platformers, nothing is going to stop him from claiming his rightful place as the king of indie games!"
―Quote's description on the MOJO!!

Quote was the first of two newcomer contestants revealed at the MAGFest 2019 SiIvaGunner panel, the other being Adam Levine. He was selected by backroom among ten randomly chosen fan suggestions submitted during the panel. On March 7, 2019, an official trailer for Quote was released at the end of "Plant - Cave Story", and his source list was revealed in the SiIva Direct 4.1.2019.

In Round 1, Quote faced ZUN and lost. In the Loser's Bracket, he faced Papyrus and was eliminated. 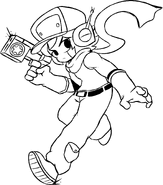 Quote's old icon from the Mojo.
Add a photo to this gallery

All of Quote's victory quotes references a special text message that appears when collecting an item from Cave Story with different descriptions based on the item itself.

Retrieved from "https://siivagunner.fandom.com/wiki/Quote?oldid=177296"
Community content is available under CC-BY-SA unless otherwise noted.