Rips From Around The Way 7

Rips From Around The Way 7

7:10:24
Rips From Around The Way 7 is a high quality album released by SiIvaGunner. The album compiles various rips featuring "Yankin", as well as other songs released by American rapper Lady. It was announced through the video "A WELL-RECEIVED, GRATITUDE-INDUCING, HIGHLY ANTICIPATED ANNOUNCEMENT" on Yanksgiving.

7 bonus images were included in the album, as well as mp4 files of the rips "Sigma - Marvel vs. Capcom Infinite", "Pretty Bad - OneShot", and "Continue? - Peppa Pig: The Game", an mp4 file of the Big Ben segment from "Main Theme - Vine", an mp4 file of this video posted by the @GiIvaSunner Twitter account, and a txt file with the following text:

A spoof of the "bond burger" image featuring Lady and the Master Emerald.

A spoof of the "silence, brand" image.

An edit of the album cover with Lady's face removed.

An animated gif of the Twerkey as seen in "LET THE FEAST COMMENCE...".

Artwork of a fake Miitopia-themed Friday Night Funkin' level, set in the Realm of the Fey and featuring the Twerkey. 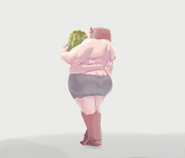