Protagonist in the SiIvaGunner Christmas Comeback Crisis
Nozomi Tojo (also spelled Toujou Nozomi; 東條 希 Tōjō Nozomi) is a member of the J-Pop idol group μ's from the Love Live! franchise.[1] On the SiIvaGunner channel, she acts as the personification of the song "Snow halation", and usually appears as a deformed chibi version called "Smol Nozomi". She is usually considered the channel's deuteragonist behind Grand Dad (matching the memes that the chatracters represent), though in the channel's actual lore, she is the protagonist.

On November 1, 2015, Triple-Q posted a drawing called "very smol nozoomu" on Tumblr.[2] On December 2015, he posted another drawing of the character on Tumblr[3] and made a short YouTube video featuring the two Smol Nozomis: "nozoomy's very smol adventure".[4] On January 31, 2016, he posted a video "How to draw: Smol Nozomi".[5] The "smol" variations of characters then became popular and Smol Nozomi became associated to Love Live! and Snow halation in the SoundCloud community. Triple-Q has since drawn a "smol" version of every character of the group µ's from Love Live! School Idol Project!.[6]

On the SiIvaGunner channel, the character Nozomi Tojo has often been used to represent the meme Snow halation, like in Triple-Q's cover of the album GilvaSunner's Highest Quality Video Game Rips: Volume 3 & Knigra. Smol Nozomi has then appeared in videos before the SiIvaGunner Christmas Comeback Crisis a few times, like in Slot Machine (Beta Mix) - Star Fox. She is also featured on the lighthouse next to Grand Dad in most versions of the channel banner.

In The SiIvaGunner Christmas Comeback Crisis, Smol Nozomi acts as the main protagonist after evading the Voice Inside Your Head's takeover (presumably because she was too smol). As several elements from the CCC are inspired by Kirby Planet Robobot, her personality in the series is very similar to Kirby (for example, she is treated as a silent protagonist despite being a singer).

After hearing the Voice's ambitions ("Seasonal Return"), she was determined to save her meme friends. She was however quickly spotted by one Patrol-Bot which sent a Spheric after her. Cornered in an alleyway, she managed to short-circuit the robot ("No Place To Hide"). Then, as a hatch opened on the Spheric, she jumped into it and the Spheric turned into the Smolitzer, a mecha with her palette color that she instinctively knew how to pilot. With her new vehicle, she saved the Rapper's Union from another Spheric.

She later encountered Wood Man ("Will of a Knight"), but the Robot Master fell into pieces before she even attacked him. After that, she met the lonely warrior Meta Knight who explained her that Santa Claus was in danger and that they had to rescue him. They infiltrated Santa's Workshop controlled by the Voice's minions and saved Santa ("Advent of Hell"). They eventually managed to escape the self-destructing facility after defeating the Voice's army and Nathaniel Welchert.

In most videos, Smol Nozomi and regular Nozomi are used interchangeably: e.g. in "Trailer Theme (In-Game Mix) - Sonic Mania" where a picture of non-smol Nozomi Toujou is captioned "SMOL Toujou Nozomi" (see below). Despite looking different, these two forms are most likely supposed to represent the same character in the SiIvaGunner universe, just like how the character Grand Dad is sometimes represented by Fred Flintstone with Mario's head instead of the usual color-swapped Mario, but is still the same character.

However, unlike Grand Dad, there are a few exceptions where Smol Nozomi and regular Nozomi are seen separately:

When asked about this in a 2018 livestream, Chaze the Chat stated that the two Nozomis being separate was "up in the air".[7]

The original image of Smol Nozomi posted by Triple-Q on his Tumblr. 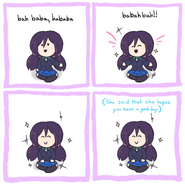 Nozomi after escaping the Patrol-Bots.

Nozomi chased by a Spheric.