Solid Snake is a character from the Metal Gear series, and a competitor in the King for a Day Tournaments. He was selected by the rippers.

Snake was the fourteenth competitor revealed on July 24, 2018. His source list included rips of games made by Hideo Kojima, such as Metal Gear and Snatcher. Snake lost to Off the Hook ft. Glenna Nalira in Match 7 of Round 1.

"Kept you waiting, huh? Solid Snake makes his miraculous return to the field of battle! He seems to have snatched a stylish outfit on his way here, and it’s a look only he could pull off. His weapons are also fully-loaded this time around! Get out there and show them what you’re made of, Snake! No regrets!"
―Solid Snake's description on the MOJO!!

Snake returns in the King for Another Day Tournament with a Snatcher-inspired outfit. His source list has been expanded to include music from any game Hideo Kojima has worked on and box-related rips.

Snake faced off against Pitbull and the Aliens in Round 1 and won, but lost to Dr. Piccolo in Round 2. He battled the Rhythm Masters in Round 2 of the Loser's Bracket and was eliminated.

Lines in bold were used in the tournaments.

VS. screen against Off the Hook ft. Paruko.

Solid Snake's art from the MAGFest Trailer (Art by Eevee). 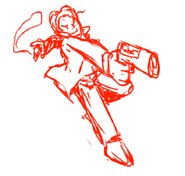 Early concept art of Solid Snake's pose, featuring him wielding his gun in a more dynamic pose (Art by Sonicheroesfan1).

Concept art of Solid Snake originally drawn by linkandorf. Note his middle finger on the trigger (Art by SmokyThrill77).

The cardboard box (Art by Coach).

Alternate artwork of Solid Snake sporting his look from King for a Day (Art by Galacksy).

Snake's old icon from the Mojo.
Add a photo to this gallery

Retrieved from "https://siivagunner.fandom.com/wiki/Solid_Snake?oldid=177294"
Community content is available under CC-BY-SA unless otherwise noted.