160
Steamed Hams is the informal name of a scene from the twenty-first episode of The Simpsons Season 7, "22 Short Films About Springfield". It is a meme on the SiIvaGunner channel.

The Steamed Hams scene comes from "22 Short Films About Springfield". The episode is a collection of shorts focusing on different Simpsons characters besides the main Simpsons family. One such short is "Skinner & the Superintendent" (according to the mock title sequence that appears midway through), otherwise known as Steamed Hams.

In this short, Seymour Skinner (Principal of Springfield Elementary School) invites Gary Chalmers (Superintendent of fourteen schools in the district, including Skinner's) to his house for lunch, but accidentally burns the roast he was preparing. Skinner quickly devises a plan: buy food from Krusty Burger (a fast-food chain) and pass it off as his own cooking. While the plan is initially successful, Seymour struggles to keep up the web of lies he made in order to pull it off. Despite this, Chalmers never calls Skinner out for lying, and goes along with everything he says even after directly pointing out a contradiction. Ultimately, Chalmers leaves the house praising Seymour's "cooking", though the latter is forced to call the fire brigade as he forgot to take his burning roast out of the oven, causing a large fire in the kitchen.

The scene was favored upon premiere of the episode, and was subject to numerous parodies and remixes beginning as early as 2010, but really took off as a popular internet meme in February 2018, being subject to several "X but Y" edits similar to The Nutshack and "We Are Number One", although in this case since this scene is not a song, the edits were rarely song-based and often resulted YouTube Poop-esque videos.

The theme song to the short, "Skinner & the Superintendent Theme", plays just as Skinner is caught trying to escape the kitchen with his leg on the windowsill. It was released in an album titled Go Simpsonic with The Simpsons. Its lyrics are listed below:

Singers:
Skinner with his crazy explanations,
The superintendent's gonna need his medication!
When he hears Skinner's lame exaggerations,
There'll be trouble in town tonight!

Rips have incorporated this theme in a variety of ways. The most obvious way is the use of the song "Skinner & the Superintendent Theme"; this appears in melody change/arrangement rips, though the song is quite short making its use limited. The first rip that referenced the scene, "But the Earth Refused to Die - Undertale", actually came out in 2016, and features voice clips from the scene. It has also been parodied in full, in the rips "Investigation ~ Opening 2004 - Phoenix Wright: Ace Attorney − Trials and Tribulations" and "Wood Man & Robbie Rotten - A SilvaGunner Christmas Comeback Crisis Side Story". 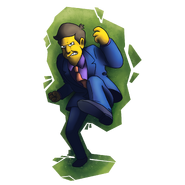 KfAD2-styled art of Skinner by Alexander A. McDonald. Released in the kfad2 art folder.

A parody of the title card. Used in Wood Man & Robbie Rotten - A SilvaGunner Christmas Comeback Crisis Side Story.