Thanos is a character from the Marvel comics, and a competitor in the King for a Day Tournaments. He was initially selected as a popular fan submission, being #4 in the ballot overall.

Thanos was revealed as the eleventh competitor on July 21, 2018. His source list included rips from Marvel games, as well as rips related to "Fireflies" by Owl City and rips from Fortnite. Thanos killed Ajit Pai in Match 6 of Round 1, but was ultimately defeated by Reggie in Match 3 of Round 2.

"With the newfound power of Disney behind him, Thanos re-enters the fight! After the previous tournament upset the balance of the universe, this Deviant once again seeks to restore it. Gauntlet on his fist and mouse cap on his head, the Mad Titan is prepared to win the tournament, and, of course, celebrate by going to Disneyland with those sweet half-length lines — there is only a 1 in 14,000,605 chance that he won’t!"
―Thanos' description on the MOJO!!

Thanos returns in the King for Another Day Tournament. He now wears a Mickey Mouse costume, referencing Disney's ownership of Marvel. His source list has been expanded to include songs from mainline Disney canon and theme parks, music from Walt Disney Studios and Pixar films, and music from the Star Wars series. Fortnite music has been removed from the list, probably due to Thanos' appearance in Fortnite not being relevant anymore.

Thanos' art from the MAGFest Trailer (Art by LarryInc64). 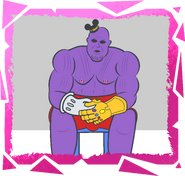 Thanos describing his loss of Titan in the interview room. (Thanos Dance or da Harlem Shake fo today – Thanos Reinterview)
Add a photo to this gallery

Retrieved from "https://siivagunner.fandom.com/wiki/Thanos?oldid=192031"
Community content is available under CC-BY-SA unless otherwise noted.