The painting by thebluecat of the same name.

)
Character bio
The Jazz Cats are a trio of cats consisting of Shades DuPris, Tom "Milk Bowl" Malone, and sphelonious donk. They are contestants in the King for Another Day Tournament.

"Sights set on winning, the Jazz Cats join the jam! Shades is ready to cut the competition with his nasty bebop licks. Milk Bowl is preparing the dirtiest chord you’ve ever heard. And sphelonious donk. These three felines will whip out any tune in the Real Book just to taste the catnip of victory."
―The Jazz Cats' description on the MOJO!!

The Jazz Cats were initially hinted at in a cryptic Tweet posted by the @GiIvaSunner Twitter account on August 29, which contained a Minecraft screenshot featuring renditions of the three cats.

The Jazz Cats were properly revealed in the "SiIvaGunner: King for Another Day Tournament Direct 9.21.2019". Their source list consists of jazz arrangements of game tracks, rips featuring jazz standards such as "'Round Midnight", "Don’t Get Around Much Anymore", and "So What", The Lick, rips featuring songs by modern jazz/funk artists such as Louis Cole, Vulfpeck, and Hiatus Kaiyote, and rips featuring cat-related songs such as "The Lion Sleeps Tonight", "Eye of the Tiger", Cat Stevens songs, and Pussycat Dolls songs.

The Jazz Cats managed to beat Adam Levine, Nico Nico, and Jack Bros, but got two concurrent losses to Law & Disorder and Mariya Takeuchi, eliminating them.

Dual Arrangement thumbnail with themselves.

VS. screen against Adam Levine.

VS. screen against Nico Nico.

VS. screen against Jack Bros..

VS. screen against Law & Disorder.

VS. screen against Mariya Takeuchi.

Image from "Party’s Over… ~ A Heart-To-Heart with Off the Hook". The Jazz Cats, Johnny Bravo, Mr. Krabs, King Dedede, and Escargoon are in the background. 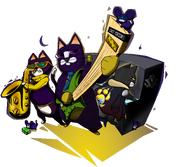 "The Jazz Nyakuza" alternate costume by AndDrew.
Add a photo to this gallery

Retrieved from "https://siivagunner.fandom.com/wiki/The_Jazz_Cats?oldid=213099"
Community content is available under CC-BY-SA unless otherwise noted.