Unregistered HyperCam 2 is a character designed by 813N[1] based off HyperCam 2, a recording program that was frequently used in early YouTube videos. It was created for use within the King for a Day Tournament and won the tournament. It was selected as a unique fan submission.

For winning the King for a Day Tournament, a dedicated channel takeover was organized for him and was held between October 9, 2018, and October 10, 2018.

Hypercam's first match against Will Smith took place on July 30 at 7AM. It would win this match by a popularity vote of 75.2%, the third highest percentage victory in the tournament. It would then go on to Round 2 on August 2 at 7PM against ZUN and win again by a vote of 60.1%. After a 24 hour halt, it continued to its semifinal match against King Dedede on August 5 at 7PM. Winning by a vote of 61%, another 24 hour break took place before the final match. On August 8, Unregistered Hypercam 2 would face off against Off the Hook ft. Glenna Nalira. The next day, it was revealed that Unregistered Hypercam 2 had won the match by a vote of 56%, and would receive its takeover at a later date.

Lines in bold were used in the tournament. The rest are from the "All Victory Fanfares and VS Lines!" video.

Because of his victory in the previous tournament, he is ineligible to compete in the sequel, making him one of two veterans to not return. However, as revealed in "SiIvaGunner: King for Another Day Tournament Direct 9.21.2019", he would become the next host of the tournament, replacing John Notwoodman. He later became Unrestrained HyperCam 2 after being corrupted by the King for Another Day Crown and battled the finalists Mariya Takeuchi and DJ Professor K, plus all of the other competitors from the tournament, who used the power of The MF Like Button to defeat the crown and return HyperCam back to normal.

HyperCam has at least one victory quote against The Crown used in "THIS GAME'S WINNER IS... [FINAL BOSS BATTLE]".

HyperCam and Smol Nozomi.
Add a photo to this gallery

King for a Day[edit | edit source]

Winner thumbnail.
Add a photo to this gallery

King for Another Day[edit | edit source] 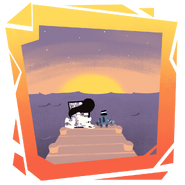 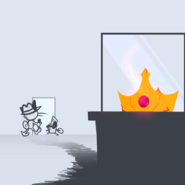 Unregistered HyperCam 2, Meowth, and the KfAD2 crown. Image from The Calm.

Unrestrained HyperCam 2 on the thumbnail of "The FINAL BOSS approaches ..." 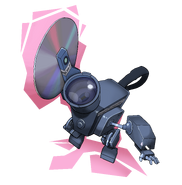 Unregistered HyperCam 2's art in King for Another Day without the top hat.
Add a photo to this gallery

King for a Day[edit | edit source]

King for Another Day[edit | edit source]

Retrieved from "https://siivagunner.fandom.com/wiki/Unregistered_HyperCam_2?oldid=200764"
Community content is available under CC-BY-SA unless otherwise noted.