Video Game Music to Do Your Taxes To is a high quality album released by SiIvaGunner on April 19, 2018. It mainly features rips uploaded during the Tax Day event 2018.

The following images were included in the album: 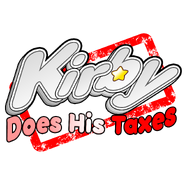 Kirby Does His Taxes Logo by MtH

Kirby Does His Taxes Thumbnail by MtH

Retrieved from "https://siivagunner.fandom.com/wiki/Video_Game_Music_to_Do_Your_Taxes_To?oldid=87439"
Community content is available under CC-BY-SA unless otherwise noted.